If you are familiar with Korean food at all, then you might know that Koreans have our own version of “Chinese” food, kind of like there is westernized Chinese food. Korean “Chinese” food is SUPER popular in Korea and I would guess is very different from actual traditional Chinese food.  It tends to be super cheap and there are restaurants everywhere. It’s also very common for people to get it delivered because delivery is super quick and like I said, there are Korean Chinese restaurants everywhere! 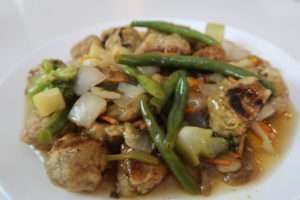 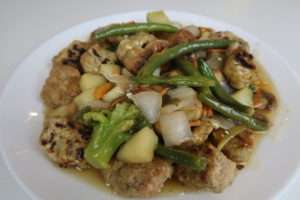 I used to LOVE Korean Chinese food as a kid in Korea and jajangmyeon (black bean noodles) and tang su yuk were my favourites. It was a special treat every time my parents would get us Chinese food. It’s kind of like the equivalent of when your parents took you to McDonald’s as a kid in North America.

I’ve already done a veganized version of jajangmyeon (black bean noodles) and the recipe can be found below:

Now one thing that I really missed was tang su yuk, which is the Korean version of sweet & sour pork. It’s definitely not exactly the same as sweet & sour pork, but it’s a similar idea. Crispy fried pieces of pork drenched in a sweet & sour sauce. Tang su yuk was definitely one of my favourite foods as a kid and I’m so happy to have made a vegan version of it. Obviously, as vegans, we don’t eat pork! So instead of pork, we made these fried rice/tofu/lentil balls that are super yum. No, it doesn’t taste like pork or tries to imitate pork – it’s just its own thing that tastes great as it is. It may not be the healthiest thing but I’m telling you – it’s SO good. 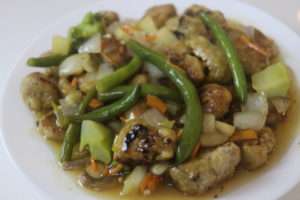 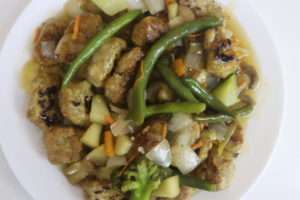 I didn’t do a “proper” recipe video for this, because I made this up on the spot as I was filming a RECIPE?! video – a type of video where you rummage through the kitchen and find ingredients and formulate some sort of a recipe on the spot. This was part of my collaboration with the amazing hot for food.

Here’s the video of my Tang Su Yuk RECIPE?! (written ingredients and instructions below)

So this isn’t going to be a standard “recipe” post, because I honestly don’t know how much of everything that I used. But here’s a list of the ingredients and the APPROXIMATE measurements.

For the sauce (from Korean Bapsang):

Recommended vegetables (I used what I had on hand, but these are some ideas): 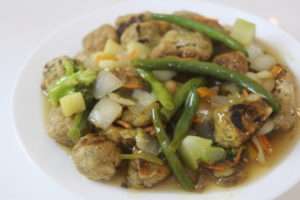