Watch above to COOK WITH ME and scroll down for the written recipe!

There are a few non-vegan cooking channels that I follow on YouTube to get inspiration for cooking. Don’t get me wrong, it really does hurt me that I see so many animal products being used in cooking through these channels and sometimes I would prefer to completely avoid looking at it, and only sticking to vegan recipes. But I feel that this would be a disservice to veganism as I think it’s important to show people that we can easily veganize non-vegan recipes and enjoy the same types of foods in a vegan way. 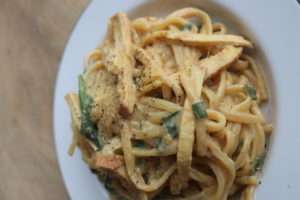 I feel that so many dishes can be so easily veganized and still taste absolutely delicious and sometimes following these non-vegan channels and social media accounts really helps me get inspiration to have new and creative ideas!

For instance, this new and delicious veganized pasta dish that I made… 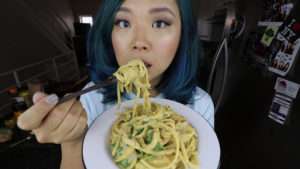 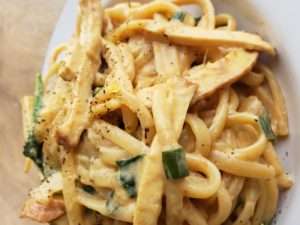 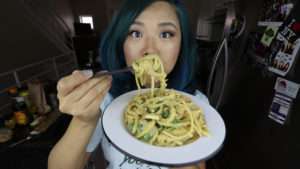 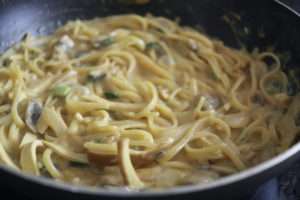 I was inspired by a YouTube channel that I follow called Future Neighbor. This is one of the non-vegan cooking channels that I follow who make lots of Korean dishes. I watched one of their videos where they make a pasta called Toowoomba Pasta, which apparently was/is a dish in Outback Steakhouse restaurants. It was supposedly very popular in Korea, especially. Not really sure why?!

It’s a dish that includes a lot of heavy cream and shrimp and has a slight spice to it.

This sounds like the most un-vegan dish ever, right?! 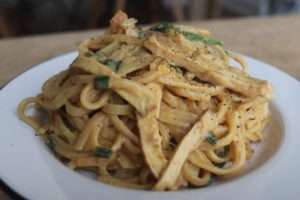 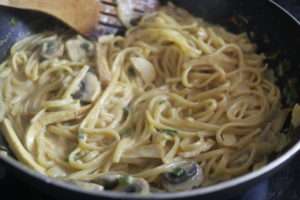 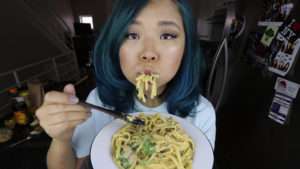 Now I’m not saying that this is a complete copycat recipe of the dish – it’s simply INSPIRED by. I watched the video by Future Neighbor and I decided that I just had to veganize this dish – it seemed simple enough.

I also wanted to challenge myself by not only veganizing the recipe, but also making this a ONE POT PASTA DISH. Plus, this is going to be a much healthier version because I didn’t go too heavy on the fats – I used a small amount of full fat canned coconut milk, but other than that the ingredients are very clean and much lower in fat than using heavy cream. So not only is this a veganized recipe, it is also healthier AND you don’t have to wash more than one pot! 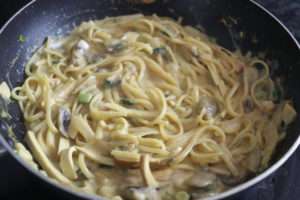 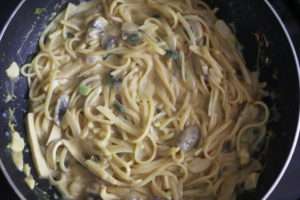 Well, the result was nothing short of amazing and I have to say I was very proud of myself. Almost nothing went wrong, which is a rarity in my “Cook With Me” videos (video series where I show myself cooking something I’ve never made before and hoping it will work out… spoiler alert: sometimes it doesn’t).

Honestly, this creamy pasta with a slight kick was so comforting, satisfying and delicious – it was simply restaurant-worthy. I wouldn’t be shy to serve this in a nice restaurant. And if you gave this to a non-vegan and told them it was vegan, they would probably not believe you! 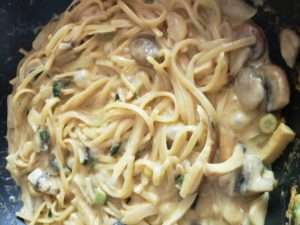 Anyway, you can watch the video above to see the process from start to finish – how I made it and the adjustments I made. The written recipe ingredients and instructions below have been tweaked based on the tweaks I made while I was cooking – so if you’d rather follow the written recipe, it’s there for you.

Now without further ado, here is the VEGAN Toowoomba Pasta Recipe aka Spicy Creamy Alfredo One-Pasta (I really don’t know what else to call this…). 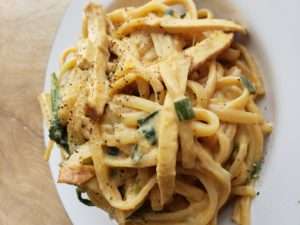 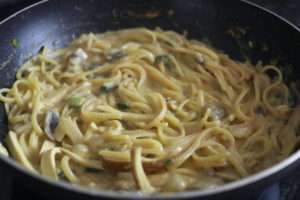 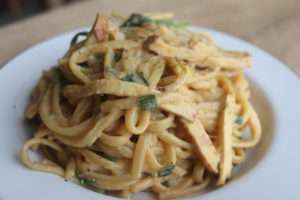