I haven’t filmed a mukbang video in a while! If you don’t know, “mukbang” is the Korean word for an EATING SHOW. Yes, it’s essentially an eating broadcast and has become a HUGE internet phenomenon. It started off as a weird trend in Korea, where people literally started to make videos of themselves eating a lot of food in front of the camera… and the public loved it. Now it’s taken over the internet world and there are many videos from Koreans and non-Koreans alike eating food and filming themselves doing it. 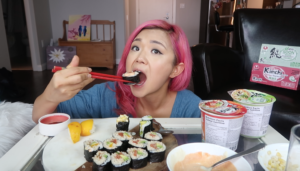 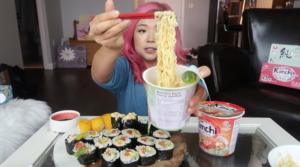 I, myself, have done a few mukbang videos in the past – although they are definitely not my forte. I do enjoy filming them once in a while since I love eating food but it’s not something I want to do too often since it requires that I consume a very large amount of food… well, I guess that’s not a requirement but I think it’s a lot more appealing and weirdly satisfying to watch when the person can eat a lot of food.

Anyway, I was craving sushi and I’ve wanted to do a instant cup ramen mukbang video for a while, so I thought I’d combine the two and have a huge feast!!

Here’s the delicious vegan sushi I made. Note that I am NOT an expert at making sushi and I am still a beginner! 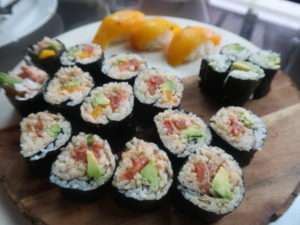 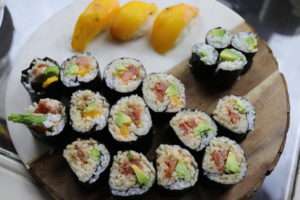 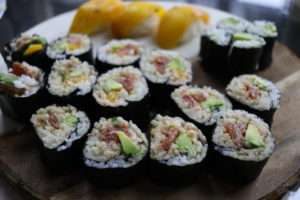 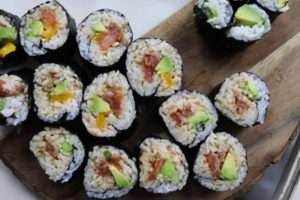 I made some spicy vegan “tuna” rolls with avocado and roasted pepper, some roasted pepper nigiri, some small avocado rolls (or I tried to make them…) and some corn & vegan mayo “gunkan maki” (which is not pictured because they were so ugly and I failed at making them).

If you want the recipes for some of these vegan sushi ideas, here’s a video I made a while back:

I have a pretty severe obsession with SUSHI in that I love sushi in all forms… It’s actually one of the reasons I was a “pescetarian” for a long time instead of making the switch to vegan. My ebook contains some vegan sushi ideas, such as a VEGAN SUSHI PIZZA. 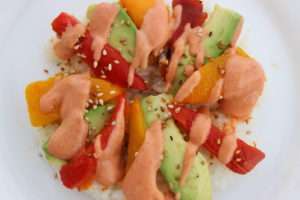 If you haven’t purchased my 60 easy recipes ebook yet, go and get it here!

I decided to prepare all the ingredients and then sit down and make them in front of the camera… you can watch me make faces like this: 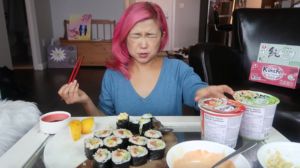 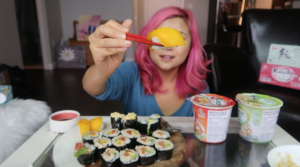 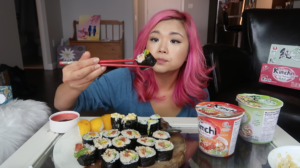 I also tried out two different kinds of VEGAN FRIENDLY instant cup ramen noodles. If you’ve been watching me for a while, I think you might know that I LOVE instant noodles… It’s possibly my biggest vice (other than booze… lol).

A Korean company called Nongshim sent me their two different styles of vegan instant cup noodles. If you want to get your hands on them, you can get them from Amazon (links below):

*Note – the above are affiliate links, meaning I will make a small commission if you purchase anything using those links. 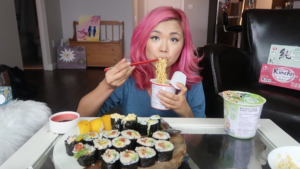 Anyway, I hope you all enjoy the video!!! Happy munching 🙂