Watch my MUKBANG (eating show) above! 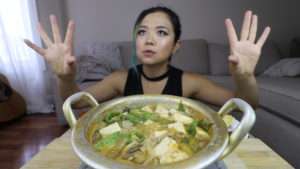 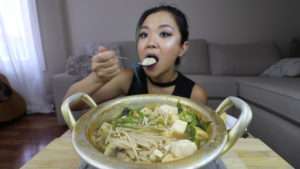 Not too long ago, I showed you guys how to make one of my favourite Korean dishes which is DWENJANG JJIGAE. Dwenjang jjigae is fermented soybean paste stew and this is a VERY popular and traditional Korean dish. Every Korean has grew up eating this delicious AND healthy stew which comprises of FERMENTED SOYBEAN PASTE. I know that doesn’t sound like the most appetizing thing in the world, but this is most definitely one of my favourite foods of all time. 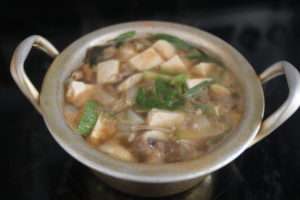 No – it’s NOT vegan traditionally because the broth is generally flavoured with anchovies. And I used to be concerned that I could not get the same flavours or the same amount of deliciousness without anchovies BUT I couldn’t have been more wrong. I actually think without the anchovies, it makes it less pungent and easier to eat a lot of. The vegan version is JUST AS DELICIOUS, if not more delicious than the non-vegan version of this.

Not only is this a super quick meal to make, but it’s also super healthy and satisfying (at least to me!). I always crave this every time I haven’t had Korean food in a while or when I’m craving somewhat of a super satisfying but healthy meal. 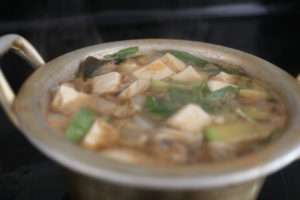 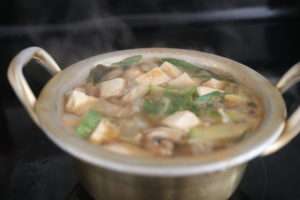 Dwenjang itself has a ton of nutritional benefits (as do lots of other fermented foods) and you can also add tofu (highly recommended) and veggies into this dish, making it even healthier. 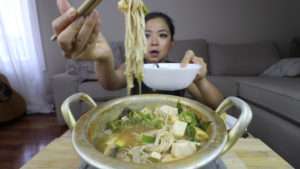 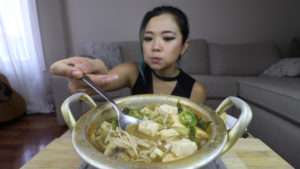 I ate my meal with a bowl of rice and a plate of BANCHAN (side dishes). A Korean table usually consists of lots of side dishes (we usually eat rice with whatever combination of side dishes, and most Korean people have some side dishes sitting in the fridge that they take out every meal and eat a little of!).

I ate my meal with some pan-fried tofu I had left over, some vegan kimchi that I bought at a Korean supermarket (I almost never buy kimchi – I usually have my mom’s! Recipe here), and some Korean green peppers which I dipped in a slightly spicy dipping sauce. 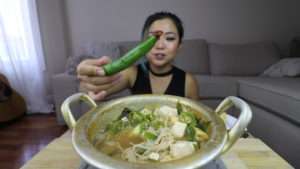 I LOVE Korean green peppers (I think they’re called Cheong-gochu but I could be wrong!) and dipping them in the yummy sauce. Seriously – it’s so good, I could eat a whole meal of that and just a bowl of rice!

This entire combination of food was just sooo good, I couldn’t stop eating and had to keep getting more rice.

Watch the video above to enjoy this super satisfying meal with me! 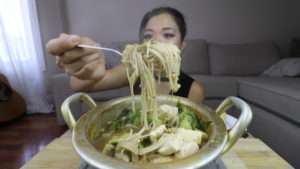 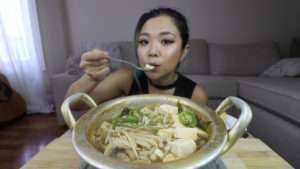