See below for description and vegan hot pot ingredient ideas! 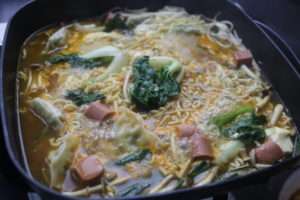 Hot pot is a type of Chinese soup dish, where you have a big pot of soup stock that you fill with many different types of ingredients. It’s very popular amongst the Chinese and usually most of the ingredients aren’t vegan friendly – but it is (like many things) very easy to make vegan, as long as you just substitute some of the ingredients. 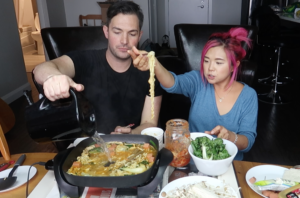 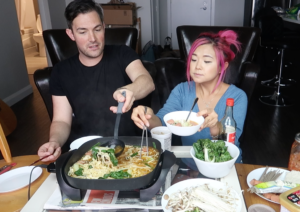 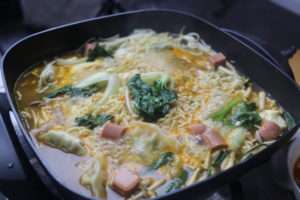 The point of hot pot is to keep the big pot of soup at your table and keep it simmering whilst throwing in different types of ingredients. Everything is cooked at the table and everyone has their own individual bowl to eat from. What’s great about hot pot is that it’s super easy as long as you have some good ingredients to throw in (and a good broth going). And you can also have a lot of fun with your friends… 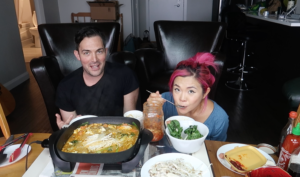 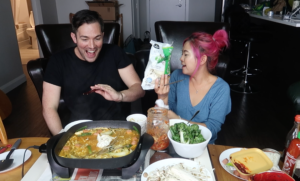 I decided that I wanted to do a hot pot mukbang (eating show) with one of my best friends that is visiting from London. If you’ve watched my videos from the beginning, you probably recognize Daniel!! We’ve been friends for a long time (since university) and even though we are both from the same city in Canada (Calgary), we lived in London together in 2016. We were even flatmates for about 6 months! Anyway, he’s been a big part of my channel in the very beginning and since so many people love him, I had to bring him back. We both love food (Especially Asian food) so I thought this would be perfect, especially since the weather is starting to get cold. 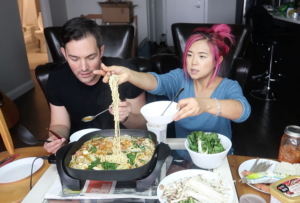 There isn’t really that much of a “recipe” required for hot pot, but I wanted to provide an idea as to how to get started. Especially if you are vegan, you may not know what to put into your hot pot so we came up with a few ideas and suggestions.

Keep in mind that I am Korean and by no means a hot pot expert; but I’ve had hot pot a few different times with my (many) Chinese friends. I also don’t believe in rules and if there are rules, they’re meant to be broken. As long as you get the idea, you can do it in whatever way and it’ll still work (at least in my opinion haha). Essentially, the most important thing is that you’ve got a pot in the centre of the table, you’ve got some chopsticks, you’ve got some ingredients, and you have some awesome people to enjoy the food with! 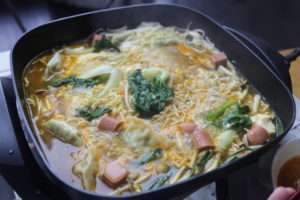 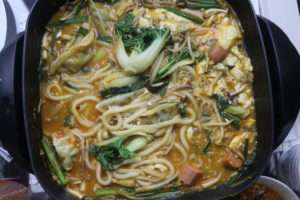 The ingredients are really up to you – these are just some suggestions and ideas. Feel free to mix and match, use some or all… whatever makes you happy!

You can also make individual dipping sauces with things like soy sauce and/or sesame oil, which I think is normal in hot pot – although we didn’t do this because we didn’t feel it was necessary.

For the soup base:

If you have any more suggestions on what to add to your VEGAN hot pot, let me know!