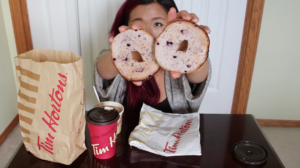 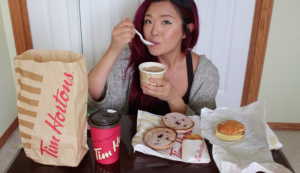 As a Canadian, I am a big fan of Timmy’s. It is a very affordable and highly popular coffee shop chain all over Canada (I believe they have some shops in the US as well, and I even saw Tim Hortons coffee being served somewhere in Ireland! Crazy…). Timmy’s is very popular for their cheap coffee, their pastries (especially their Tim Bits – which, unfortunately, are not vegan…) and let’s face it – their ice caps.

As a vegan, I wanted to know what are some of the vegan options that you could get a Timmy’s. I decided to film myself (Mukbang = eating show) eating a bunch of their vegan breakfast menu items to show people that yes, you can be vegan and eat at Timmy’s!

Check out the video here

Here is a list of some of the VEGAN things you could get a Timmy’s. The unfortunate thing is that they don’t “officially” carry non-dairy milk, but according to a lot of people, apparently some of them do! So it never hurts to ask 🙂

Note: I cannot guarantee the accuracy of this list – I found the information from their allergy chart as well as some other websites. Please double check on the website or at the store, if you’d like to make sure.

Bagels (Ask for no butter and peanut butter instead, if you’d like!)

1 thought on “Vegan at Tim Hortons!”