Get Fit With Me & Meal Prep (Jerk Chili?)

I’m starting a new series on YouTube called “Get Fit With Me” – I know, such a unique title! I am always talking/thinking about how I want to get fit, lose fat and look god and yet lately, I don’t seem to be seeing much progress. I want to do this in a HEALTHY way – meaning I don’t want to obsessively count calories, I don’t want to starve myself, I don’t want to “over-exercise” and I DON’T want to over-stress about it. 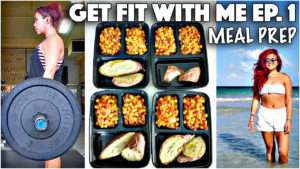 My history with dieting~

To be honest, I’ve never been much of a big “dieter”. I always knew that eating close to nothing or eating only one type of food (like the “cabbage soup diet”) was never a good idea and that I would end up gaining the weight back later. Plus, I LOVE food (as you know) so it would be close to impossible for me to give up such a thing. So I never did a crazy crash diet – except for maybe one time. I wouldn’t necessarily call it crazy but when I think about it now, it sounds pretty crazy because I can’t imagine doing such a thing again.

Four years ago, I booked a trip to Vegas somewhat last minute because all my friends were going to a rave and I wanted to join (EDC, for reference). In case you haven’t been to a rave or music festival, most people wear close to nothing (lol). So many of my friends were going and were preparing by doing an “EDC diet”. So I joined in and because I only had about a month and a half to lose the weight, I “crash” dieted. I was already working out on a regular basis (about 5 times a week) and I started counting calories religiously. I stuck to eating 1200 calories a day and of course, there were some days that I caved and ate a bit more. I would feel super guilty afterward and loath myself. Oh and 1200 calories wasn’t “net” calories (I wouldn’t count how many calories I burnt while working out – I only counted how many I was eating). So I don’t really know how I had enough energy to function.

Needless to say though, I started seeing results super quickly (because I was eating almost nothing!). I lost about 10 pounds in maybe a little over a month. For someone that weighed 125lb in the beginning, going down to 115lb makes a dramatic difference. Of course, I was showered with compliments – people telling me how good I look, commenting on how much weight I lost… I started getting more and more “motivated”. I say this in quotations because it was more of an obsession than anything else. Eating such little food is not “motivation” – it’s more like disordered eating.

At the time, I don’t think I realized but I was OBSESSED with food. Food consumed my thoughts day in and day out. I would be sitting in the office, constantly thinking about food. I would be counting down the hours and the minutes until lunch so I could eat again. I would be sat on the train on the way home, thinking about dinner and how hungry I was. If I caved and ate more than I was supposed to, I would feel guilty and ashamed that I had no “self control”. THIS IS NOT NORMAL BEHAVIOUR.

I lost the weight but of course, it wasn’t long before I started gaining it back. I remember by the winter, I had already gained back five pounds (and loathing myself for it even though I still weighed only about 120 – now I weigh around 130…). I know they say metabolic damage isn’t real, but I do feel like I did something to my metabolism or to my body that made it much easier for me to gain the weight back after the diet that I did.

Don’t get me wrong, I still look at my old pictures thinking I wish I could have that body again. But I keep reminding myself how SHORT-TERM it was and how much it messed up my head (and probably my body). This time, I’m looking for LONG-TERM solutions and building habits for LIFE. Eating 1200 calories a day is NOT sustainable for the rest of my life. I could barely do it for the month that I did.

Get Fit With Me

I bought jerk seasoning and I didn’t know what to do with it…. but I’m one of those people that don’t really feel the need to follow the rules so I just do whatever I want. I think that’s the key to cooking – do whatever the hell you want! So I decided to mix it into a “chili”-like thing. Not sure if this is common practice at all, but it ended up tasting super awesome. Lots of flavour and deliciousness. The jerk seasoning itself had salt in it, so I didn’t really need to add additional salt.

Sweet potatoes are SO GOOD even on their own – which is what makes them such a great food to eat. It’s a whole plant-based food and you DON’T EVEN NEED TO ADD SALT.

Anyway, here’s what I did for the meal prep: