Cook With Me: Vegan Carbonara (?) and Tonkatsu 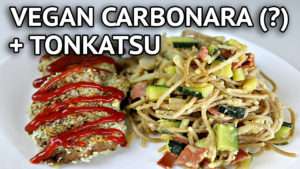 It’s really tough for me to come up with recipes because half the time I just throw things into a bowl/pot/pan and hope for the best. I normally don’t even measure my ingredients because I find it easier to just eye-ball things (unless I’m baking something). So that’s why I am drawn toward doing more of these “RECIPE?!” videos, where I can just make something on the spot and I don’t have to worry about writing down measurements or ingredients lists…. see, I really am lazy…

Now because the RECIPE?! name is from hot for food blog, I won’t be stealing or using that term any more (other than when we collaborated). I think I’ll just be calling this “Cook With Me”, where I literally just …. cook with you guys! Most of the time, it will be just random and on the spot – taking things out of my fridge and pantry and seeing what I can come up with. Sometimes, it could be more structured or I might have something in mind.

For this episode, I went through my fridge and decided to make some sort of a creamy carbonara style pasta. I wouldn’t really say it’s exactly carbonara (mainly because I don’t really know what carbonara tastes like exactly) but I think it’s quite similar since it contains veggie bacon and some creamy (but not TOO creamy) sauce. It actually turned out super yummy and the veggie bacon gave it a nice smokey flavour, which I think is something that carbonara has…. please correct me if I’m wrong (I don’t really remember eating carbonara much so I might not actually know what it’s supposed to taste like…heh…) 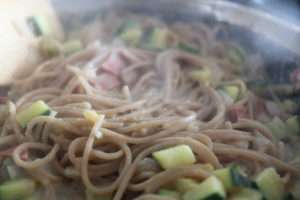 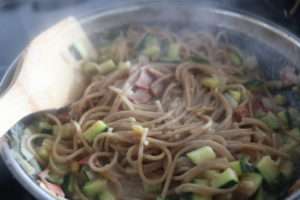 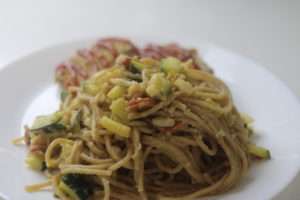 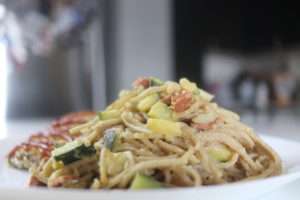 I also had some left over wheat cutlets (I guess this would be seitan…) in the fridge that I needed to use up. This was store-bought and I had it from my Korean BBQ video that I did previously. At first I was thinking about just sticking it into the pasta but I thought I’d do something different with it, so I decided to simply batter it and make it into a vegan tonkatsu. If you don’t know, tonkatsu is a Japanese (and also Korean) style dish consisting of breaded and deep-fried pork. I used to love it as a kid and there’s something just so satisfying about something that is nicely breaded and deep-fried. 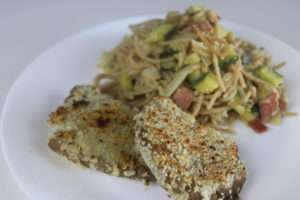 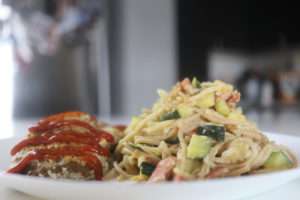 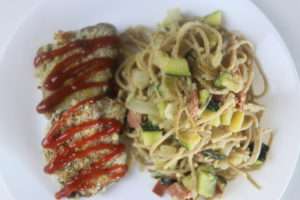 I actually did one of these “Cook With Me” videos a LONG time ago when I was still living in London. I had just come home from the gym and I needed to make a quick meal so I took you through the process of me trying to figure out how to make a one-pot pasta from scratch (without following a recipe). IF you want a good laugh watching me trying to figure out my life, check out the video below: