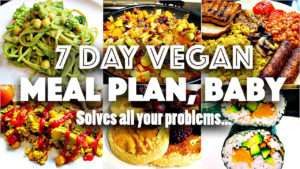 I’ve been seeing this “7 Day Vegan Challenge” thing going around on YouTube… to be honest, I have my own personal thoughts on these whole “vegan challenges” – especially the ones where people make videos about them. I don’t have a problem with people trying out a vegan challenge – I actually think it’s a great thing, even if it means they don’t actually go vegan. It opens their eyes to the vegan diet and still plants a massive seed in their brain. In fact, I did a week long vegetarian challenge a few years before I gave up eating meat. Look where I’m at now!

I think doesn’t lie in the fact that people are doing vegan challenges… the problem lies in the fact that these vegan challenges have become somewhat of a fad or a trend. Something that will get you lots of views on YouTube, which is why some YouTubers jump on the bandwagon. Not because they actually want to try out going vegan or are at ALL interested in veganism, but because they want some new fresh content for their next video. Now, I’m not condemning these people or trying to call them out – I’m just stating my opinion that I don’t think that these videos are necessarily GOOD for veganism.

I know some people say that “any publicity is good publicity”, but when big YouTubers come out and do a video where they try out a vegan diet and they constantly talk about how weak they feel, how hungry they are, how much they are craving bacon and how difficult it is to be vegan EVEN IF IT’S ONLY FOR A WEEK, then how can we actually say it’s good for veganism? I just hope when the general public watches these videos, they know that these aren’t really people interested in veganism at all… they are just doing this for views, which is why they are so ill-prepared.

ANYWAY, enough talk. I wanna give somewhat of a SOLUTION to this 7 Day Vegan Challenge. I present to you…. a MEAL PLAN! It’s nothing super serious or super demanding – it’s just a loose guideline… food inspiration, if you will. It’s a simple guide to lead people toward the right direction and show people that vegans eat more than just salad. Some delicious food for the week, so they don’t feel starved or incredibly weak after the first day of following a vegan diet.